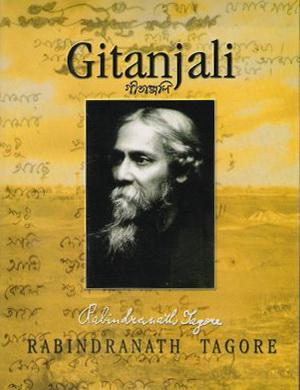 Gitanjali ("An offering of songs") is a collection of 103 poems by Rabindranath Tagore. While a majority of the poems are translations of the original Bengali version, a number of them are also selections from his other works including Gitimallo, Noibeddo, Khea, and so on. In other words, the content, structure, and delivery of the English version is remarkably different from the Bengali source.

The translations were undertaken prior to a visit to England in 1912, where the poems were extremely well received. A slender volume was published in 1913, with an exhilarating preface by W. B. Yeats. In the same year, based on a corpus of three thin translations, Tagore became the first non-European to win the Nobel prize.