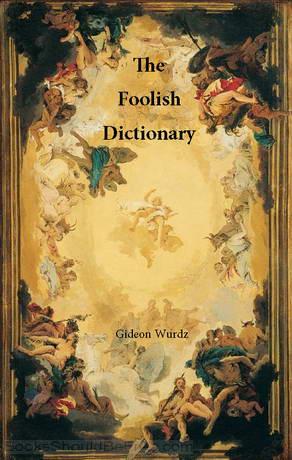 “The Foolish Dictionary” was written by “Gideon Wurdz” and was published in 1904. According to the beginning of the book, it is “An exhausting work of reference to un-certain English words, their origin, meaning, legitimate and illegitimate use…”

This a a short but amusing dictionary which “redefines” words in some interesting ways. Funny and sometimes bizarre observations are sprinkled throughout. In keeping with the policy to read, rather than attempt to rewrite, books – even those with offensive content – nothing has been omitted. While many of the definitions may just seem confusing or “corny” to modern readers, there are a couple that also might be considered “objectionable,” particularly in section 10, which contains offensive content of a racial nature.

An exhausting work of reference
to un-certain English words, their
origin, meaning, legitimate
and illegitimate use,
confused by
A FEW PICTURES

To
MY DOG,
Who first heard these lines
And didn't run away
MAD,
I Reverently Dedicate
This Tome