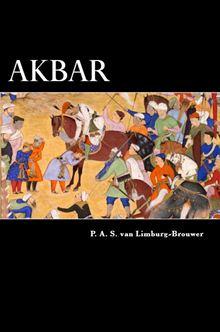 Shahanshah Akbar-e-Azam also known as or Akbar the Great (14 October 1542 – 27 October 1605), was the third Mughal Emperor. He was of Timurid descent; the son of Emperor Humayun, and the grandson of the Mughal Emperor Zaheeruddin Muhammad Babur, the ruler who founded the Mughal dynasty in India. At the end of his reign in 1605 the Mughal empire covered most of northern and central India. He is remembered for having a liberal outlook on all faiths and beliefs and during his era, where culture and art reached a zenith as compared to his predecessors. P.A.S. van Limburg Brouwer was a lawyer, literary scholar and member of the Lower House, 1829-1873 . A scholar of classical antiquity , from 1856 he worked at the National Archives in The Hague. His scientific study on the East inspired him to write his only novel: Akbar (1872). The book gives an impression of life in India at the time of Emperor Akbar (1542-1605).