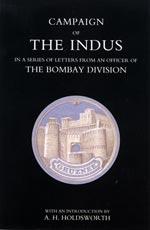 This book consists of a series of letters (13 in all) from a young officer of the Queen's Regiment (2nd Foot) to members of his family, describing his experiences in the First Afghan War (1839). T.W.E Holdsworth (and that is how he signs himself at the end of his letters), wrote them without any thought of subsequent publication; it was the father (A.H.Holdsworth) who decided they were worth publishing as a book (he was right) and then only a few copies for friends. He himself has provided a long (25 pages) introduction as background.

The importance of Afghanistan as far as India was concerned was that it formed a buffer against Russia (regarded as the main threat) and against Persia.The First Afghan War resulted from a decision by the Governor General in India to replace the ruler in the country, Dost Mohammed, by a puppet king, Shah Suja, who had been ruler years before but was heartily disliked and had been thrown out. An expeditionary force was formed from the armies of the Bengal and Bombay Presidencies, some 20,000 men with double that number of camp-followers, which was called the Army of the Indus. The British element consisted of the 4th Light Dragoons (later renamed 4th Hussars), 16th Lancers, Queen's (2nd Foot), Somerset Light Infantry (13th Foot) and R Leicesters (17th Foot). Holdsworth's regiment was in the Bombay column which began its march in December 1838 with Kabul the objective. It was a march of about 400 hundred miles through rough terrain and mountain passes; the columns were frequently raided and cut up by tribesmen, particularly the camp-followers. These letters give a good account of what it was like campaigning in such conditions, heat, exhaustion, disease and harassing tribesmen combined to make it a gruelling operation.

There were two major battles, the capture of the fortress of Ghuzni in July 1839, and of Khelat (Kalat) in November, where Holdsworth was wounded by a musket ball which passed through his arm and right side coming out through his back just missing his spine. These actions are graphically described. An appendix contains among other things the official despatch from Lt-Gen Sir John Keane, the army commander, to the Governor General; casualty details; congratulatory order from the army commander to his command; extracts from the Indian Gazette and the letter from the Bombay column commander to the Governor General.

Campaign of the Indus:

In a Series of Letters From an Officer of the Bombay Division.

With an Introduction, by A.H. Holdsworth, Esq.