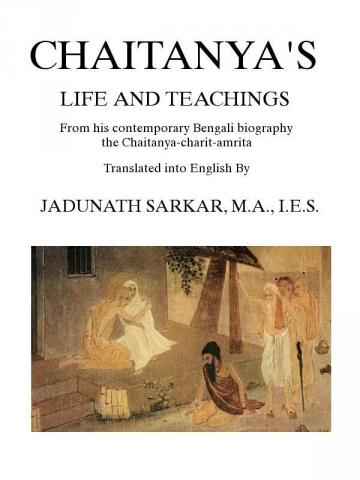 The Chaitanya Charitamrita is one of the primary biographies detailing the life and teachings of Chaitanya Mahaprabhu (1486–1533), a Vaishnava saint and founder of the Gaudiya Vaishnava Sampradaya. It was written by Krishna Das Kaviraja (b. 1496), primarily in the Bengali language, but also including a great number of Sanskrit verses within its devotional, poetic construction, including Siksastakam . Intertwined with the stories of Chaitanya Mahaprabhu's life are philosophical conversations detailing the process of Bhakti yoga, with special attention given to congregational chanting of Krishna's names and the Hare Krishna mantra.

Chaitanya's Life And Teachings
From his contemporary Bengali biography the Chaitanya-charit-amrita:

Who has done so much to make the Vaishnav saints of the south known to us,

I dedicate this attempt to place the original life of Chaitanya--the greatest Vaishnav teacher of the north within the reach of all readers of English who know not the Bengali tongue.

The Author and his Book ›