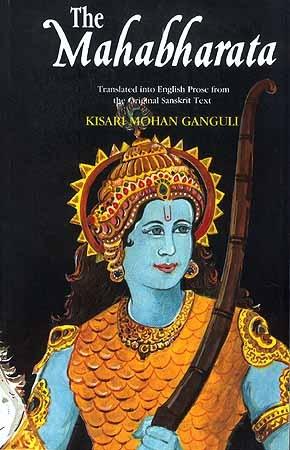 The Mahābhārata is an epic poem containing 100,000 verses and primarily dealing with the struggle for control over the throne of Hastinapura between the two branches of the Kuru clan, the Pandavas and the Kauravas. This struggle reaches its denouement in the battle of Kurukshetra.

The Mahabharata is replete with stories, stories within stories, philosophical discourse, and devotional material. Among the principal works and stories that are a part of the Mahabharata are the Bhagavad Gita, the story of Damayanti, an abbreviated version of the Ramayana, and the Rishyasringa, often considered as works in their own right.

As listed below, this epic is broadly divided into 18 parvas with each parva (chapter) further divided into upaparvas (sub-chapters). This version of the Mahabharata is a translation by Kisari Mohan Ganguli published between 1883 and 1896.

You people did a great job,in relaying to the common man the works of sri Kisori Mohan Ganguly(he translated the sanskrit version of veda vyasa mahabharat word to word into english for the benefit of common man

After reading Mahabharat,I feel proud to have been born in mother India.I thank God for having created me in mother India due to which I got an opportunity to read Mahabharat.The knowledge contained in Mahabharat is fully scientific with its beautiful sweet language and the examples which are given in Mahabharat to make facts clear are awesome.Thks to sri Kisori Mohan Ganguly and all people who were directly and indirectly involved with the production of this book.I feel this book should reach each Indian and each human being on earth to have a peaceful earth.