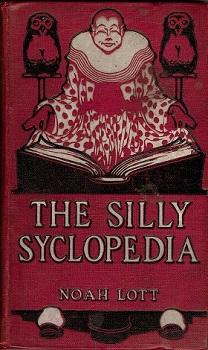 George Vere Hobart Philpot (1867-1926) was a Canadian author and humourist. He wrote under the pseudonym Noah Lott. He wrote The Silly Syclopedia in 1905.

(An Ex-relative of Noah Webster)

Embellished with
Numerous and Distracting
Cuts and Diagrams by