Omens and Superstitions of Southern India 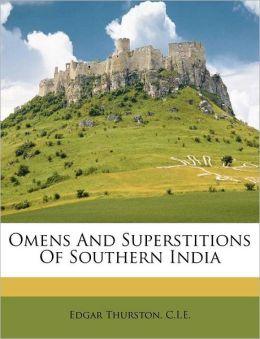 This book deals mainly with some aspects of what may be termed the psychical life of the inhabitants of the Madras Presidency, and the Native States of Travancore and Cochin.

BY THE SAME AUTHOR.

Castes and Tribes of Southern India.

This work is of great value to ethnologists, and to those who are interested in Indian life, religions, and customs. It contains a mass of information as to the life, legendary lore, and traditional practices of all the southern Indian castes and tribes, arranged in the form of a dictionary, and is elaborately illustrated by reproductions of photographs. Published at the Government Press, Madras. Agent: T. FISHER UNWIN, London